Because of this movement of water from one place to another, a large volume of the sea must 'squeeze' back and forth through the narrow Dover Strait - so there are strong tidal flows and a large rise and fall in the depth of water between High and Low tide. To complicate things a little more, the position of the moon relative to the earth and the sun affects the gravitational pull that is moving the water. When the sun, moon and earth are in line we have maximum tides known as SPRING TIDES. This is every 14 days (on the new moon or the full moon). When the moon is at 90° to the earth, we have minimum tides known as NEAP TIDES. This is every 14 days (when the moon is in its first and third quarter). Thus we have 14 day cycles with the tides going from 'Springs' to 'Neaps' and back to 'Springs'.

As the tidal cycle is a little over 12 hours from one high water to next, the times of high water change every day - getting later as the days progress.

When consulting tide tables, remember they may be in GMT, you must add one hour for British Summer Time.

Most swims take place on the weaker Neap tides. The steadier the tide, the longer the period of slack water when the tide turns - and the slower the tidal flow. But the major factor on any Swim is the weather - and good weather on a Spring tide gives the faster swimmer an opportunity for an attempt. However, local water currents on 'Springs' are more changeable and run faster - and making landfall is much more difficult - so such Swims require more planning by the Pilot and the Swimmer. 'Springs' are much less suitable for the slower swimmer and more suited to Relays.

Starting & finishing Points: The shortest distance across the Channel is from Shakespeare Beach (Between Dover and Folkestone) to Cap Gris Nez (the headland halfway between Calais and Boulogne). Most England/France swims start from Samphire Hoe or Shakespeare Beach between one hour before High Water and one hour after High Water, although the Pilots do start at other times and places, depending on the tide, the weather conditions, and the swimmer’s ability. France/England Swims, (no longer sanctioned by modern regulations), used to start from the vicinity of Cap Gris Nez. The traditional start time from France was about 3 to 4 hours before high water, although this also varied considerably depending on the tide, weather, Swimmer and Pilot.

A Chart of the Dover Strait. 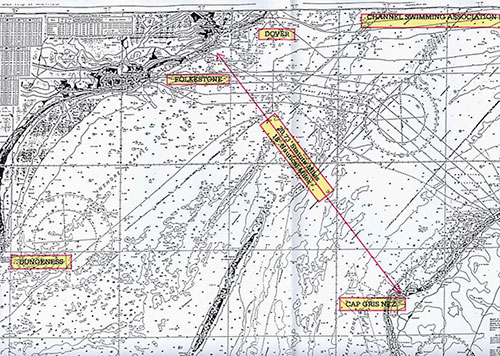 The English Channel is one of the busiest shipping lanes in the world, with approximately 500 vessels movements every day ... and there are ferries, hovercraft, sea-cats and jetfoils crossing between England and France at very regular intervals. Because of this, International Shipping Lanes have been agreed and their areas marked on the charts. On the English side we have the 'South West Lane' which is for vessels travelling down Channel to the Atlantic. On the French side we have the 'North East Lane' for vessels which are travelling up to the North Sea areas.

The English Coastguard, stationed at Langdon Battery Dover, and the French Coastguard, stationed at C.R.O.S.S. Cap Gris Nez, keep radar and VHF watch on the whole of this area liaising with the vessels using the Channel. They broadcast navigational bulletins every half hour and log vessels using the lanes to co-ordinate ship movements and to monitor safety. In these announcements they warn shipping of the presence of Cross Channel Swimmers, and give the latest known positions of our Escort Vessels, all of which are equipped with AIS.

Channel Swims differ from other swims of this distance by their complexity and the local environment. Some of the difficulties are highlighted in the sections on the Channel Swimming association web site on 'Training', 'Course' and ‘Weather’. There are hazards such as jellyfish, seaweed, flotsam and jetsam (rubbish and timbers, etc). Most particularly, we have to navigate safely across the Commercial Shipping Lanes - and give way to most other vessels in the Strait and there is an element of luck involved in getting everything to fall right on the day. 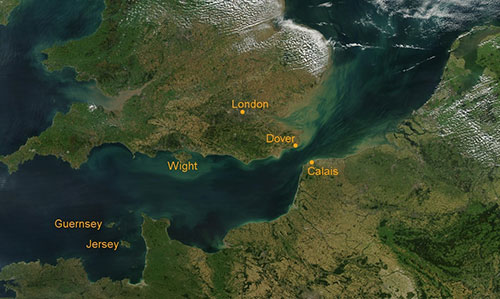