Mervyn Sharp was the first person to complete 7 crossings. 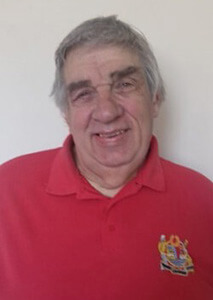 Inducted into the International Marathon Swimming Hall of Fame in May 2007 at Fort Lauderdale, Merv is pictured with his certificate.

Mervyn was an adventurer who grew up on the South Coast of England spending many happy hours as a child on Weymouth Beach.

At age seven, he joined the local swim club but he loved swimming in the sea. At age 14, in 1963, he joined the local water polo club as goalie conceding only two goals to opponents during the season. In 1965 at age 16, when congratulating a school friend on swimming the English Channel, he met his friend's coach and trainer, Tom Watch, and began to dream that he, too, could swim the Channel.

With Tom's encouragement, his parent's support, lots of training and the desire to succeed, Merv walked into the chilly waters of English Channel only two years later and swam from Dover to the coast of France, a distance of 21 miles as the seagull flies. Then he did it again the next year, and the year after that until he had seven crossings to his name.

But Merv didn't stop there. In the winter, he supplemented his conditioning by wrestling in the local Amateur Wrestling Club competing in

London, Manchester and other locations and ending up as the Silver Medalist - Intermediate British Heavyweight.

During the swimming season he completed other swims: Lulworth Cove to Weymouth - 10 miles, Weymouth to Lulworth Cove to Weymouth - 20 miles, Torquay to Brixnam to Torquay - 8 miles, Exmouth - 5 miles. Lake Bala, Wales - 8 miles, Swanage to Weymouth - 30 miles, Swanage to Bournemouth, 9 miles and many other swims for charity. In 1970, he was selected to represent England at the International Lake Windemere Championship and finished fifth overall, the second Englishman to finish, behind Windermere International Champion Michael Read. During the summers of 1971 and 1972, he competed in the professional circuit in Canada competing in Lake St. John, Saguenay River, Chicoutimi to Bagotville and the La Tuque 24 Hour Swim in Quebec.

In 1996, Mervyn Sharp's name once again appeared in the Guinness Book of Records as the "First Person to Cross the English Channel every way Possible" - Swim (in it) / Boat (on it) / Aeroplane (over it) / Train/Euro Tunnel (under it).