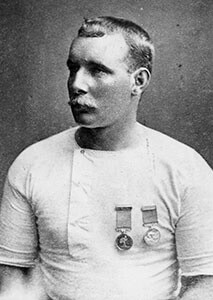 A Brief History of Channel Swimming and the Webb Family

1855
Learnt to swim in the River Severn. Rescued his younger brother from drowning. To demonstrate his balance he walked across the top of the Buildwas Bridge. Liked to read adventure stories, especially about the sea.

1860
Joined the training ship "Conway" and helped to rescue a fellow cadet.

1866
Left the firm with a second mate’s ticket.

1873
Aboard the “Russia” where he attempted a dangerous rescue and was finally picked up a mile astern of the ship.

1874
H.R.H. the Duke of Edinburgh presented Webb with the silver medal of the Royal Humane Society and the first Stanhope Gold Medal- to be awarded annually for the greatest act of gallantry of the year. 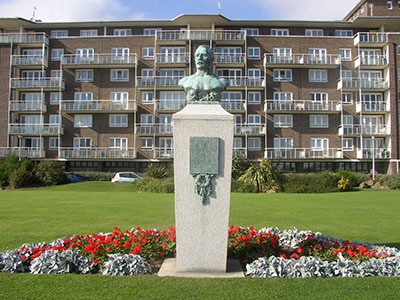 In preparation for his Channel swim he trained in the River Thames. He swam the 20 miles from Blackwell Pier to Gravesend in 4 hours 20 minutes, a record, which stood for 20 years.

On the 12th August he attempted his first Channel swim but was unsuccessful, retiring after 6 hours 47 minutes.

Then on the 24th August he swam from Dover to Calais in 21 hours 45minutes, covering a distance of approximately 40 miles.

1876
A popular hero, he was much sought after, feted and rewarded with purses and other gifts. What he wanted was a position in a dockyard or institution for the encouragement of swimming, but neither was forthcoming.

1878
With few options available he resorted to giving lectures, diving, swimming and floating exhibitions, followed by endurance tests and races in England and America.

1883
During a 6 day swim against Mr W Beckwith he began to spit blood and had to retire. His doctor brother told him that he should give up such exhausting feats, but he was not deterred. He considered swimming the Irish Channel, but abandoned the idea in favour of swimming the Rapids below Niagara Falls, from the suspension bridge to below the whirlpool.

In 1883 he took his wife, son Matthew and daughter Helen to the USA. He trained in the rough Atlantic seas during June and July. On the 24th July he made his fatal attempt to swim below the Niagara Falls. His body was found 4 days later at Lewiston. Mrs Webb attended the inquest and his temporary burial at Oakwood Cemetery, Niagara Falls, N.Y. After his death Mr Beckwith promoted a Capt. Webb’s Widow Gala at Lambeth Baths London and on view was a portrait model loaned by Madame Tussaud’s.

1884
Mrs Webb returned to Niagara Falls and had a granite column erected over a new burial site adjoining the “Hermit of Niagara”. Later, others were buried also alongside him. Carlisle Graham in 1886, the first person to go through the Rapids in a barrel and live, Homan Walshboy in 1899, who flew a kite across the river holding a piece of string, to which was attached the first cable of the Suspension Bridge and Annie Taylor in 1901, who was the first to go over the Horseshoe Falls in a barrel and live. 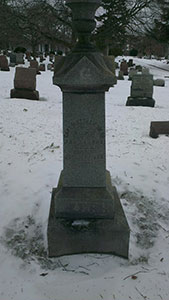 1918
Matthew Webb Jnr., who had become a pioneer mountain climber in South Africa, was killed in World War 1.

1927
The Channel Swimming Association is formed. Capt Webb’s swim was officially recognised by the Association the following year.

1975
Centenary celebrations held throughout the world to honour Captain Matthew Webb and his pioneering achievement of swimming the English Channel.

NOTHING GREAT IS EASY