History of the Channel Swimming Association

The Channel Swimming Association was formed in early 1927 when fewer than 10 swimmers had successfully swum the English Channel.

We are a non-profit making organisation. None of our revenue is accessible to any privately owned commercial enterprise. All income is applied solely for the benefit of Channel Swimming and our Membership.

Our 2012 Handbook is intended to give you a brief insight into what the Association does, why it exists and how we promote the interests of channel swimmers today.

The Official Channel Swimming Association Record Books list and detail all the Swims which have been authenticated and observed by the Association since 1927 to date and include the 8 swims made prior to 1927, which we were able to authenticate in those early years. We appreciate that some persons may claim to have swum outside of our Association.

In December 1926, Mr Alfred Jonas, the Hon. Secretary of the Webb Memorial Fund wrote as follows:

"Means are now being discussed by several men interested in swimming, to prevent this fine achievement of swimming the channel from being ruined by these artificial means and lack of investigation, and to ensure that the course from England to France shall be the accepted one, it has been decided to form an Association, namely the 'Channel Swimming Association' to draw up a code of rules governing Channel swimming".

Since March 1927, Cross Channel Swims have been organised and regulated by the Channel Swimming Association and all Swims officially observed by its designated Officials have been faithfully recorded.

Many Long-Distance Swimmers strive to join the ranks of the famous few, who have conquered "The Channel" in the Strait of Dover. To have a successful Swim officially ratified by the CSA and recorded in the Association's Official Handbook represents the highest pinnacle of success. But although occasionally swimmers do make their attempts outside of the Association, claims to have swum 'outside of the CSA' are not recorded, and are not afforded Official Recognition by the Channel Swimming Association. Fortunately, the proper registration procedure is very straightforward and Channel Swimming Association Staff and Members are there to assist you in every way.

Our Constitution allows us the flexibility to be able to make provision for the many differing needs of all bona-fide Swimmers - but our Swim Rules are, as you might expect, very strict and traditional standards are vigorously upheld. One place where we do now differ from our founding fathers is in the acceptance of France/England crossings. These gentlemen were very fixed in their ideas that a Channel Swim must be undertaken under the same conditions and especially in the same direction as Capt. Webb. Impressed as they were with the wonderful records from Cap Gris Nez, they claimed there was no comparison with the England/France crossing. They were quick to remind us that Webb’s feat was not equalled until Ted Temme made his crossing 59 years later in 1934. Even today, the England/France crossing is accepted as being the more difficult route.

At the present time the French Coastguard Authority, (CROSS, Gris Nez), do not allow swims to start from the French coast.

In 1999 the members of the Channel Swimming Association voted for the Association to become a non-profit making organisation limited by guarantee and this was put into effect.

Michael Read, Chairman of the Channel Swimming Association with guests at the Annual Dinner.

Pictured with David Meca, winner of the CSA Gold Medal 2005. 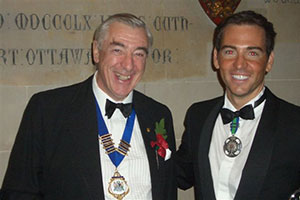 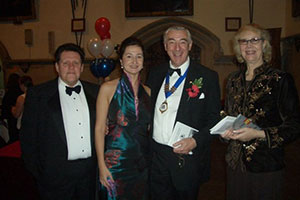