Edward Temme was the first person to complete 2 crossings. 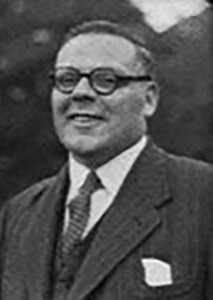 Edward Harry Temme (16 September 1904 – 26 June 1977) was a London insurance clerk. He was born in Stratford Road, Plaistow, he became a member of the Plaistow United Swimming Club, and died in Padova, Italy.

He was the first man to swim across the English Channel in both directions. He swam from France to England on August 5, 1927 starting at Gris Nez and from England to France on 18 August 1934. He was also a GB International water polo player who competed in both the 1928 and the 1936 Olympics.

Temme kept his job and trained to cross the English Channel after work and weekends. He was 200 pounds, and 6 feet 2 inches tall. 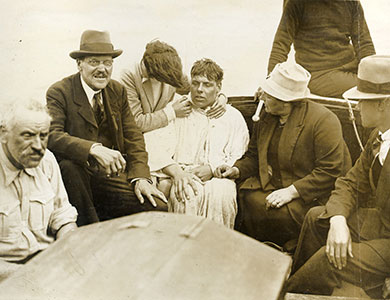 Source:Feats of an almost-forgotten hero 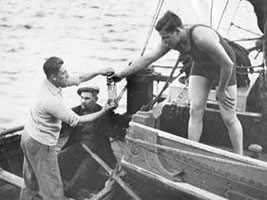 In training – Edward Temme takes sustenance from trainer Tom Story aboard Tate Cotgrove’s bawley, Honour, during one of his sessions in Leigh Creek.

In his day, the way Edward Temme, known for some reason, as Tammy, romped across the surface of the sea like a porpoise made him almost a household name.

The discovery in a Leigh attic of an 80-year-old black and white picture of Tammy is a reminder of the link this champion swimmer had with the town.

Leigh Creek was where Tammy trained over the years, building up the stamina to achieve his dream of conquest. That dream eventually came true on August 18, 1934, when Tammy became the first man to to have swum the English Channel, in both directions.

Born in Plaistow, East London, in 1904 Tammy’s working life was spent as a clerk for the insurance company, Ipswich insurance giant, Willis Faber.

Temme’s formula for success was endless training, a process of building up strength and endurance which took years. Stamina aside, Temme’s greatest sporting asset seems to have been his incredible patience.

In the days when professional sportsmen were considered a contradiction in terms and the term corporate sponsorship hadn’t entered the lexicon, Willis Faber acted as a sort of unofficial sponsor – by allowing its lad to take time off to train.

All the same, this training was conducted somewhat on the cheap. The Southend area’s proximity to and long links with East London, not to mention the relative cheapness of railway tickets, made its estuary an obvious practice pool for Temme.

The photo shows Temme about to enter the waters off old Leigh, while his trainer, Tom Story, looks on. It was taken in about 1925.

When in Leigh, Temme lodged in the Hillside Road cottage of local fisherman, Fred Cotgrove, known universally as “Tate.'”

It is not known if Honour also accompanied Temme on his actual cross-Channel exploits, though it seems unlikely, since Honour’s ancient engine was notoriously temperamental.

Leigh bawleys would usually put out as a fleet to fish, but the other boats, with more reliable engines, would often be out of sight over the horizon while Tate still tried to kick some life into his cronky machine.

Temme first made his name as a water polo champion and even twice represented his country at the Olympic Games.

But the idea of a two-way Channel swim remained his chief preoccupation. Others had attempted this aquatic double since the turn of the century, but had ended in failure.

Tidal and other conditions tend to make the journey from France to England far more daunting than the corresponding trip from England to France, breaking the will of many an already exhausted swimmer at the halfway stage.

Temme’s formula for success was endless training, a process of building up strength and endurance which took years. Stamina aside, Temme’s greatest sporting asset seems to have been his incredible patience.

He couldn’t afford to practise in the waters off the French coast. Instead, he sought out and swam against the dangerous riptides of the Thames Estuary as a suitable alternative.

His efforts were finally repaid in August, 1927, when Temme covered the 42 miles from Dover to France and back again in one go. Clearly something of a glutton for punishment, he repeated the exercise on August 19, 1934.

Little is known of Temme’s character, although perhaps there may not have been a great deal to know if the words of a more recent swimming hero are any guide.

American 2008 Olympic swimming champion Michael Phelps described his motivatation as: “I swim, I sleep, I swim. That’s me.”

It’s an attitude which might quite well sum up Tammy Temme, the swimming insurance clerk.

However, Tammy was clearly made of the right stuff in other ways. He joined the Army at the outbreak of the Second World War, and rapidly rose from private to captain.

He was also clearly a convivial type, remembered for his generosity at the bar in the pubs of Old Leigh.

Sadly, all that immersion in salt water seems to have left him with a painful legacy, severe arthritis.

The condition was so debilitating that he travelled to Rome for special treatment involving spiritual as well as a medical healing. It was there that he died, aged 74.

Now almost forgotten, Edward Temme Avenue a small, residential road in Newnham, East London, close to his birthplace, stands as his sole memorial since Tammy Temme has no gravestone or memorial plaque.

The swimmer chose the place which meant most to him as the final resting place for his mortal remains. His dying wish, appropriately enough, was for his ashes to be scattered on the waters of the English Channel. 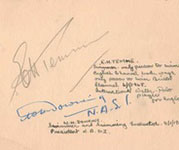