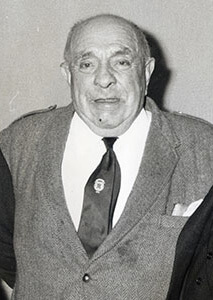 Ned Barnie is one of the Edinburgh characters remembered in the swimming baths recollections section of this web site and the information on Ned comes from that website. 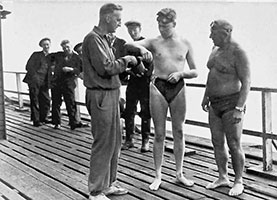 © Reproduced by courtesy of Evening News and with acknowledgement to Bryan Gourlay, Biggar, Lanarkshire, Scotland

"I remember Ned Barnie doing a demonstration swim at a BoyScout Gala at Dalry baths where he amazed us all by doing a Johnny Weismuller (Tarzan) underwater swim of a full length and a return part-length. I think he was a former Channel swimmer."

Ned Barnie was a very famous bloke, around Edinburgh, for his many Channel swims and involvement with kids. He lived in Portobello. He is the older chap on the right of the picture and would have been aged almost 60 when the picture was taken.

"Ned Barnie and a young John Smith were preparing to swim from Granton to Burntisland, which Ned had done on five previous occasions, once there and back. On this occasion, the 7 mile swim took four hours and 20 minutes.

Born in 1896, Ned was the first Scot to swim the English Channel (in 1950) and the first man to swim it both directions (1951). He held the record of being the oldest person to swim the Channel for 28 years. He was a dedicated swimmer, estimated to have completed 200,000 lengths of Portobello baths in 1932.

As well as teaching science, he regularly swam in competitions. He won the Scottish Amateur 880 Yards Freestyle in 1924 and 1925 (cutting an amazing 18 seconds off his winning time) and was Scottish Amateur Swimming Association president in 1946. During the First World War he was awarded the Military Medal.

He was officially known as W E Barnie (and appears in the record books as such), but was such a “weel kent” figure in Portobello, he was more popularly known as Ned.

He swam in the Forth every day, sometimes almost breaking the ice on the water. For his 70th birthday he treated himself to a swim from Fisherrow, Musselburgh to Portobello, a leisurely 2 mile journey. He continued swimming almost up to his death at the age of 87.

"Ned was my grandfather’s cousin. My grandfather moved here from Edinburgh in 1919. I remember him speaking about Ned growing up.

I must have inherited the swimming gene as I swim 5 days a week, however, I only do 3 miles a week not like Ned."

"On 16h July this year, a commemorative plaque was unveiled at 7 Straiton Place, Portobello where Ned lived for many years,"

"Around 1950, we were on holiday in King Street, Portobello when Ned Barnie came home after swimming the English Channel, and there was a big noise about him then.

I was quite young and can just remember faintly."

I visited Straiton Place on August 20, 2006, and took a few photographs of the plaque and the buildings that it has been attached to.

"I was reading the piece on Ned Barnie.

He was my science teacher at St Anthony`s school in Lochend Road, 1969-1971. He always smelled of the sea and swam 2 miles every morning. He was not a bad teacher but did seem a bit eccentric.

Thank you to George T Smith who replied to Carol Irwin (18 above).

"Carole Irwin's memory of 'a lovely guy called Ned' was possibly one of Ned Barnie whom I remember inspired us Boy Scouts with a demonstration of swimming at Dalry Baths where he swam underwater for over a length."

I never met the gent, but he was well known for going down to the beach at Portobello, early each morning, and swimming in the sea, summer and winter.

I also believe he was a teacher at DK (David Kilpatrick's) school."

This week, as reported in the Evening News, Transport giant Stagecoach has set up a £14 million joint venture with hovercraft makers the Bland Group for a proposed service to run between Portobello and Kirkcaldy in Fife.

Stagecoach says it wants to run two hovercraft on the route, with crossings every 25 minutes at peak times. The journey will take less than 20 minutes and will be linked to buses on both sides of the Firth of Forth. And with plans for a new Forth bridge being pushed ahead, despite protests, it looks like soon there will be more options for crossing the firth than ever.

Of course, if all else fails there's always the option of donning a pair of trunks or swimming cossie and plunging into the waters. While that doesn't sound the most attractive proposition in a rain-lashed November, it certainly wouldn't have daunted legendary Portobello swimmer Ned Barnie.

The city science teacher, who swam the Channel three times in the early 1950s, took a dip in the Forth every morning, regardless of the weather, and swam across it on numerous occasions.

A former Royal Scot who won a Military Medal during the First World War, he was 62 when this picture was taken in 1959 of him staggering up the slipway at Burntisland, having spent six and a half hours in the water.

Having set off from Granton and sustained only by a mug of rum on the crossing, he'd had to bypass a curious seal and several jellyfish on his journey. "That is my last long-distance swim," he declared.

The Evening News said of his epic effort: "The hard fact is that Scotland needs more sportsmen like Barnie. He has the will-power to carry on beyond the apparent limit of his endurance."

Barnie died in 1983 but over the years he inspired many swimmers, including John Smith of Bathgate, who at the age of 19 became the youngest person ever to swim the Forth in 1955 when he crossed with Barnie at his side.

John Smith was only the fourth person to have swum from Granton to Burntisland.