Brojen Das was the first person to complete 4-6 crossings. 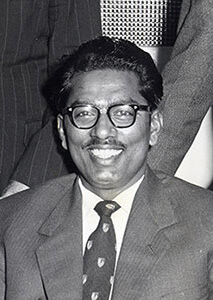 Brojen Das was the first Asian to swim across the English Channel. He was born on 9 December 1927 in Kuchiamora village of Bikrampur, Munshiganj, in East Pakistan (Bangladesh). He was son of late Harendra Kumar Das, and completed his primary education in his native village. He completed his matriculation in 1946 from the KL Jubilee High School, Dhaka and Intermediate and Bachelor of Arts from Vidyasagar College, Kolkata.

Brojen was an adept and champion swimmer from his boyhood. The turbulent water of the river Ganga (Buriganga) was his training ground. His swimming ability motivated the East Pakistan Sports Federation to introduce an annual swimming competition in Dhaka. The first competition took place in 1953. In most local and national swimming competitions and tournaments Brojen proved himself to be an outstanding swimmer. His swimming career took a new turn when he received an invitation to take part in the 1958 English Channel Swimming Competition . He took-up the challenge to become the first person from Asia to swim across the channel. Swimming the ‘English Channel’ was quite a risky affair in mid 50’s, because of a lack of meteorological data and many swimmers were unable to complete the crossing, often caught out by bad weather. Moreover, the water temperature of the Channel was very cold. However, Brojen made up his mind to go for the competition. He then made the Sitalakhya and most turbulent part of the lower Megna River as his training ground. Finally, he swam from Narayanganj to Chandpur, a distance of about 46 miles. He also accomplished with credit a non-stop 48 hours swimming, covering approx.60 miles in Dhaka swimming pool.

Immediately before going for the English Channel competition, Brojen successfully completed the Mediterranean swimming competition from Capri to Naples. The competition gave him added confidence and an opportunity to acclimatize himself to the Oceanic waters. Brojen arrived in England in June 1958 for the Billy Butlin Channel Swimming Competition. Swimmers from 23 countries joined the contest and Brojen Das was the only contestant from the South Asian countries. The swim began at midnight of 18 August 1958 and it came to a close in the afternoon of the next day. Fatigue led many to withdraw from the competition on the way, but undaunted Brojen continued with the strongest determination and joined the ranks of the heroes crossing the Channel. He not only secured the first male position in competition but also became the first Asian to cross the English Channel.

In 1959, he not only succeeded in swimming from the Capri Island to Naples in Italy, but also succeeded in three long-distance international swimming competitions. He also swam from England to France. In the subsequent year he crossed the Channel again from France-England, making him the first person ever to have made 4 successful Channel swims with the Channel Swimming Association. In 1961, Brojen Das earned glory and fame when he created World records in channel swimming to put his name in the Guinness Book of World Records. Not only did he cross the English Channel in record time, he crossed it for the sixth time and created two world records on the same day.